Many people will arrive in Tuscaloosa tomorrow for our first home game. While some folks think of “Ttown” as a college town, it’s been a city for a very long time. Check out the video above, which relies on footage and text from students in a previous class, to learn more.

Next week, students enrolled this semester in my “Antebellum America” class will, on the heels of visiting the University of Alabama’s Cartographic Lab, visit the Old Tavern Museum, the Old State Capitol ruins and the Jemison-Van de Graaff Mansion to push their thinking about emerging urban life in America.

Indeed, many buildings bear witness to a historical moment. Even ones no longer here, among them, the Kilgore House, do this.Below is a drawing a previous student made of that building where the first young women enrolled at UA lived as a new century approached. The presence of young women in Tuscaloosa dating back to the city’s founding suggests an interest in making sure the so-called “southern belle” was educated. The ability of some of them to critique the world around them shows up in the journal kept by Sarah Gayle, wife of John Gayle, Alabama’s governor from 1831 to 1835. 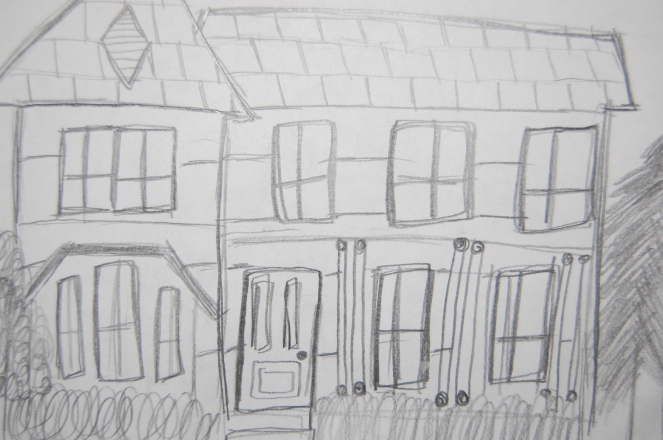 But as one student revealed last week while sketching in a campus Starbucks following our visit to Gorgas House, how do we find meaning in the thoughts of people who do not easily show up in surviving sources, among them, an enslaved person?

I’ll be curious to see how students sort through all of this information as they perform a skit at the end of next week’s field trip. I’ll be interested, too, in how their analytical skills and creativity manifest in their cumulative mapmaking project.

All of their activities will be our way of acknowledging the complexities of our shared past (and “common humanity”) as well as Tuscaloosa and Alabama’s upcoming bicentennial.

PS I have enjoyed watching these older Youtube clips of students enrolled in this class and my “The Nineteenth Century City” course to prepare for next week’s outing. I wonder where they all are now and hope our paths cross again someday.