And just like that there she was…Auntie Congresswoman Maxine “Reclaiming My Time” Waters. I saw her last night at Birmingham’s airport. She’s in Alabama partly for the Jubilee in Selma. I shall travel there to participate in a tribute to the historic walk, once remembered by my late former father in law Grant Green, the jazz guitarist, in his 1965 composition “Selma March.” But oh, to have confirmation in person that it is okay to reclaim my time beforehand. Historically, the black woman has been asked to appear as if she is a superhero. She does it so well.

Artist Amalia Amaki, former UA Professor of Art History, thoughtfully draws attention to the black woman and all her difficult pasts and presence.

Many  thoughts before me this week pose tensions with the exhibit that opened yesterday at the Paul R. Jones Museum. It was curated by students in my “Gender, Race and Urban Space” grad class. Harlem, Atlanta and yes, Miami, and other cities associated with the black body are put on display via texts and images. The idea is to interrogate the idea of a “mecca.” Is there ever such a place for the oppressed brown body? My students and I think through such an idea with various readings and visual texts in mind.

Next week, we have Chanelle Rose’s study on Miami. From the late 19th century to the 1968 riots, she reconsiders the various meanings of “blackness” and how the people of African descent in South Florida “present” differently partly owing to the early black Bahamian presence. 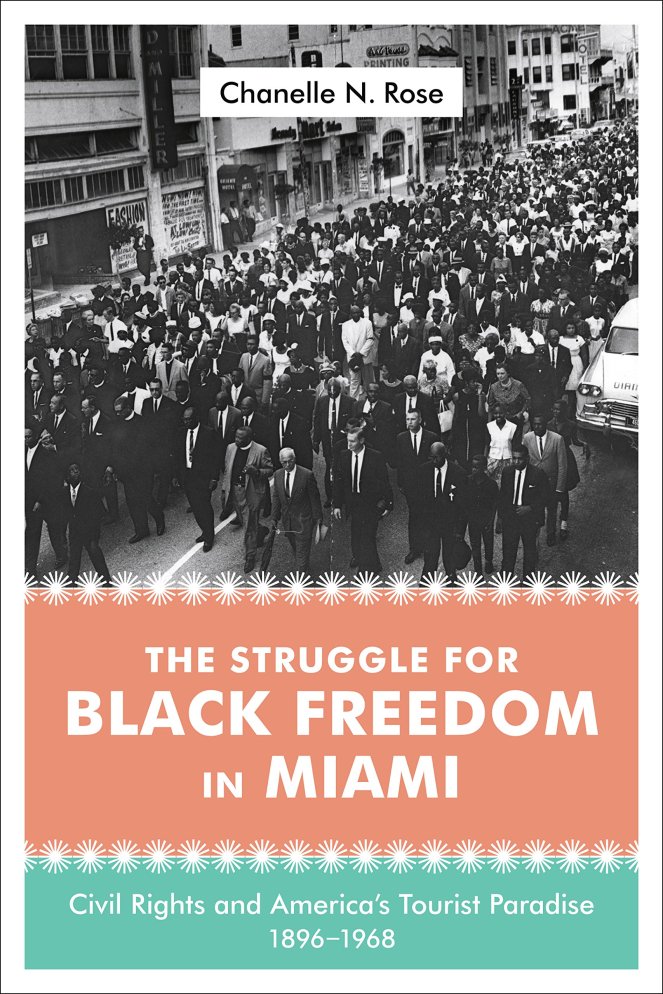 While some chapters of the NAACP were far more conservative than many black foot soldiers liked, black leaders like the late Father Theodore Gibson, who self-identified in ways that went beyond the color of his skin, made demands on white powerbrokers who, among other things, denied “blacks” the right to live in certain communities and to splash on certain beaches.

Imagine that. Were it not for black bodies, the city of Miami would not even be. Black signatures were needed when the city was incorporated the same year as Plessy, signaling the ironies ahead, ones still with us.

Were it not for the black woman’s reproductive abilities, per Jennifer Morgan, this country would not even be. But I digress. But not entirely.

For now, I want my students to ponder what Rose means when she tells us Miami helps us see how mythmaking develops. A seeming “paradise” hides many untold stories about compromise.

Why did white civic leaders in South Florida in the first half of the twentieth century have to become “less reactionary?”

What “new civil rights narrative” does the historical record insist be written if we were to take seriously the ability of the most unlikely to complicate the lives of the dominant culture? The book opens with the experiences of Patricia Stephens Due, a student leader of Tallahassee’s Congress of Racial Equality (CORE). She is the mother of my former Miami Herald co-worker and acclaimed author Tananarive Due. Mrs. Stephens Due watched the indignities of her mother who worked in a whites only dress shop on Miami Beach. She and her sister Priscilla were arrested in 1963 after staging a sit-in at a supermarket. Four years earlier, however, she’d been seen as a Hispanic owing to her light complexion, large hoop earrings and long jet-black hair and thus, she was permitted to eat at a Royal Castle in downtown Miami.

All this with her southern accent.

With her experiences in mind, what are the many ways in which Miami must be seen as a messy border culture?

And what happens when we insert the equally acclaimed Edwidge Danticat and her writings into the equation, namely when we insert her recent essay in The New York Times on the impact of environment on tourism, and the pain experienced by Haitians looking for mecca via the sea as revealed in a short story in Krik? Krak!

How do we find meaning in how the colonized  are “maneuvered” into saying thank you to their oppressors per Audre Lorde?

All this as sandy beaches await some, not all.

I will be thinking through such questions with mixed feelings as I, like many academics and artists, often live through the very thing I am studying. But I remain empowered by so many who came before me.

I am encouraged by the amazing students with whom I get to work, ones who are making their way through the mess we are leaving them.

“I was in your Am Civ class three years ago. It is the only class I will remember,” she said next, or something along those lines.

I share that not to boast, but to remind myself that my work matters.

But so does rest and reassessing so much. It is important to aid the narrations of your own life. I am not a fan of blogging or social media, but these are platforms that enable more inclusive storytelling.

I thank you, Auntie, for helping me to see this. These are platforms that help some of us restore something unsayable.

I loved “Black Panther,” but I am not Shuri.

Not in this lifetime anyway.