I’m still thinkin’ about last night’s episode of WGN’s “Underground“. Funny. I tweet so much about the show, it is as if the network is part of the show’s title given it and the fans’ use of the hashtag “UndergroundWGN.” How long has it been since you uttered a show’s name alongside something other than its name (I’m thinking the 50s and 60s…i.e. The Colgate Comedy Hour and such when sponsors were really part of the name)? Things to think about in next semester’s upper level undergrad class.

But back to my point. I am still thinking about so many scenes in the last night’s episode. All heart-stopping. But the one that keeps coming back to me is of Aisha Hinds playing Harriet Tubman who is sitting at a table doing a seemingly every day thing: embroidery.

I was reminded of how home production, or the way in which we made everything we needed because the consumer culture we now have was not yet a done deal in the antebellum period. If you wanted soap, you often made it yourself. 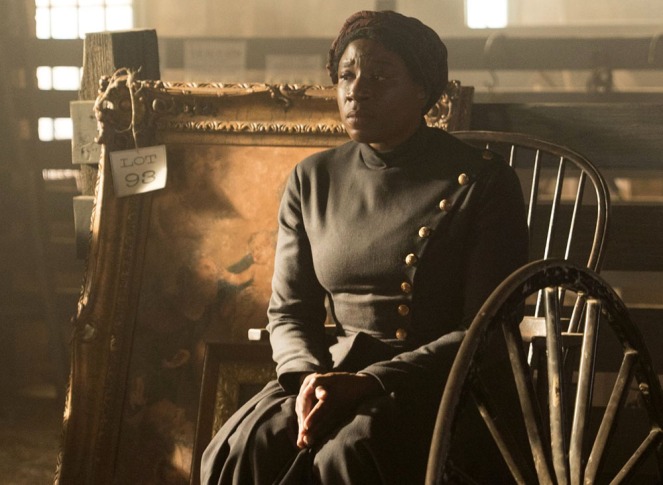 But embroidery was also something women and girls from established families did during moments of leisure. And so in that scene with embroidery, we see Tubman, a black formerly enslaved woman, engaging in quiet resistance.

A woman who owned her own time – like women from established families.

A woman who had fought for a chance to own her own time.

Like the show’s character Noah told lil James being a free was being your own master and deciding for yourself what you planned to do. And although we all know there are constraints even within such a set up, it’s a powerful truth. And it’s right there in Miss Harriet with that fiber in her hands.

I’ll learn more about fiber and home production this summer via a class and a residency all designed to make me think more about many things including women like my grandmother, a domestic for most of her life. She once gave me the most beautiful piece of cloth. She hemmed it. Stitches weren’t the best, but that wasn’t the point. She was trying to make beauty. “Hang ’em. Make nice curtains,” she said.

She was among numerous people of African descent who migrated not north, but further south in the postwar period, looking for a better life. Like Harriet, Noah, James, Rosalee, Stine and so many others in a television drama that will have its second season finale next week. Oh, for good stories. Finally, we have a good one worth sitting up for and thinking about long after the credits end.