“the most important thing is that I had a purpose….”- Harriet Tubman

I am watching the encore of WGN’s “Underground.” It is the best show on television now. I leave the classroom talking about those critical years approaching the Civil War. I come home to this wonderful show.

And in between? In between I had the honor of having dinner with the incredibly warm and approachable attorney Cleo Thomas,  first president of the University of Alabama’s Student Government Association and UA Trustee Emeritus. Indeed, this Anniston, AL, native is a historical figure in his own right. The occasion? A visit by Dr. Lisa Farrington, art historian at John Jay College at UA tonight and tomorrow.

Farrington addressed tonight the origins of racism. I address this topic in my American Civilization to 1865 course. I typically start with well known debates between historians. Does slavery precede racism or does racism precede slavery? Farrington uses art to suggest a more complex answer. 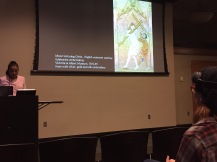 What struck me most was her saying that in the big scheme of things, despite the horrors, the American era of slavery was a thin slice of time and more remarkably, the time between emancipation and the arrival of the first “black” President is an even more remarkably smaller period of time.

As I ponder it all, I think about my heroes, among them Harriet Tubman, freedom fighter of all time. She was determined. She had purpose. She never gave up. She didn’t let those with her turn back. Whether they wanted to be free or not wasn’t up to them after they followed her. At the very least, she wasn’t ready to put the freedom of others in harm’s way by letting the fearful run back.

She came from a strong people. These are people, as Dr. Farrington told us, who survived the terrible Middle Passage from Africa. Connecting the dots. Seeing the ties. I hope my students are able to do the same as we march toward the final May 5.

Special thanks to my colleague Stacy Morgan of UA’s American Studies Department for making it possible to have dinner with two special human beings. While listening to Dr. Farrington, I shared moments with some of my favorite colleagues, among them John Beeler, Trudier Harris and Hilary Green. Dr. Farrington’s visit is part of the programming tied to the faculty-curated “Freedom?” exhibit this semester at UA’s Paul Jones Gallery.