Next Tuesday, the students enrolled in my Antebellum America course will visit the A.S. Williams III Americana Collection in the University of Alabama’s Gorgas Library. Nancy Dupree, curator for the collection, will discuss the contents from three turn of the century scrapbooks once owned by young Alabama women. The visit coincides with the course’s attention to the idea of “coming of age.”

Such an idea, as the students know, drives the plot line of many songs, television shows and motion pictures. But what if we were to apply it to a country, namely the United States? If this course has a core question, it is “What is Antebellum America?” And the shortest answer is that “it was a coming of age moment for a young nation.”

Initially, the students were asked to “tweet” an answer, or provide an answer in 16 characters or less to this question concerning the antebellum period. I was happy to see how quickly most of them moved beyond seeing this period of American history only in terms of hoop skirts or plantations. They instead expanded it to include emerging urban life and technologies like the steamboat, the growing gap between the rich and poor even as people in varying stations, free and unfree, actively  – although not always forcefully –  tried to realize the promises of freedom. It was also a mistrustful time in which many appeared as strangers. This point will be the focus of next week’s reading, Flush Times and Fever Dreams: The Story of Capitalism and Slavery in the Age of Jackson by my colleague Joshua Rothman.

Stranger. How often does that word appear in antebellum memoirs, diaries, letters and travelogues? The violence of slavery was one real extreme of a range of actions. Indeed, the antebellum period was a time when individuals were not always nice to one another. Although politeness has long been associated with the “old days” and “the South,” as two course readings suggest, the antebellum period was a time when people in an increasingly urban world had to learn how to be civil in public spaces. This reality provides a way to track the history of today’s often coarse social media comments.

All that said, the most obvious answer to the question “What is Antebellum America” is temporal, which is to say, the students understand that we are – generally speaking – referring to the period before the Civil War as “ante” is Latin for “before” and “bellum” is Latin for “war.” Specifically, we mean the period between the end of the War of 1812 and the onset of the Civil War.

However, they are also seeing how this time was a coming of age moment for a still young nation. The future of slavery in a physically expanding country figured into a host of other issues hovering including a growing sense of individualism as seen in religious fervor, but also the pursuit of material prosperity and the growing purpose of the everyday man. All this occurred alongside heavy costs to many marginalized groups, among them Native Americans and people of African descent and women.

One goal for our visit to the A.S. Williams III Americana collection is to take advantage of an opportunity to think deeply about the coming of age moment in our own lives. How much have the wishes and hopes of young people moving from childhood into adulthood changed since the antebellum period? Studying the autographs, photographs, invitations, and programs in the keepsake albums of young Alabama women might hold some clues. As Dupree has written in an essay published in Alabama Heritage magazine, these young women certainly could self-direct themselves. Even though the scrapbooks often had headings under which its owners could address prescribed topics, some of the young women used their scrapbooks to address issues outside of their school lives. These events included sports, church, vaudeville and other extracurricular activities.

There are other things to discover in these albums, which, while not being gathered in the antebellum period, reflect longings that were quite evident in letters and autograph albums kept during that period as the study of young antebellum southern women by Anya Jabour, one of this course’s readings, reveals.

Serving as testimony to how a few elite African Americans in the state of Alabama, no matter the ongoing oppression surrounding them, participated in such record-keeping, the young scrapbooking women under review include an African American college student. And telling of how urban life was increasingly one way to describe American society, most of the women lived in urban or suburban areas like Birmingham and Bessemer and were often aware of larger issues including securing women’s right to vote. Finally, in keeping with how visual storytelling is important to today’s young people as seen in the popularity of Facebook and motion pictures accessed via the Internet, photographs were of great interest to the women whose albums included pictures of themselves and groups. Dupree noted that “parents have a limited presence” in the books, however. This dynamic might speak to how these books truly were a way for young women to carve out their own identities, something that individuals across gender categories, often seek to do in an increasingly modern world.

Yes, I am already trying to think of how to keep the male students in this course interested in this assignment if for no other reason than inviting them to think about the interior lives of the women and girls in their own families and communities on and off campus. The hazards of normative labeling aside, female-centered spaces matter. As Dupree pointed out, some of the young women were humorous about their predictions for their own future. One said a classmate would become a cook on an oyster boat in Mobile. Others saw their classmates becoming missionaries in Africa. And one saw her classmates becoming vaudeville performers. In reality, their lives were less adventurous and interestingly, some of them never married. This raises interesting questions for which there may be no clear answers without in-depth study. 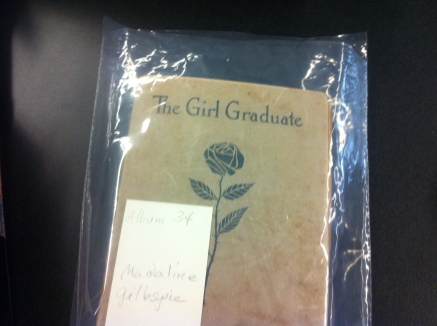 During our recent visit to the Gorgas House , the students learned that just one of the four daughters of Josiah Gorgas, a northern-born Confederate colonel and later, University President, married. One of the three unmarried daughters was sickly, but what about the other two? That we don’t fully know suggest possible new areas of research. There are limits on what archives intimate about the lives of people no longer with us. And that’s the case for the people who actually  left written traces. What about ones for whom  there are few records, among them formerly enslaved people?  This challenge will be an important question as we turn to Stephanie Camp’s study of black women in the plantation south after Spring Break.

I look forward to observing how the students in this course find meaning in the coming of age moments of American life, but also historical actors across time and space in the United States, and moreover, how they make connections to their own lives. This two-part assignment requires them to take selfies in front of a tiny light-blue campus building that sits on the site of the recently-demolished Kilgore House. This small building, once a school house for Bryce Hospital employees and later, a storage space for Alabama Heritage magazine, which was once housed in the Kilgore House was an apt space because the first female students at UA resided here. They were also asked to complete a short fill-in-the-blank essay.

The second part of the coming of age assignment, which is due March 31, involves hands-on research of these scrapbooks in Gorgas. The results of their efforts will be published in either a digital zine or hard copy zine. To ensure their privacy and encourage their openness, these zines may likely never be seen by anyone but them. If any of them give me permission to do as much, I will share excerpts from their contributions to this project.

Among the many goals of this project is to encourage this class to form a sense of community through exercises that emerge as being corny in a still new course that is very much a work in progress. For sure, the young, turn-of-the century Alabama women who kept those scrapbooks manifest themselves as being part of a cohort of able graduates who had some hope for their own lives. Perhaps this class can feel something similar. More critically, in an age when we hide behind smart phones and computer screens, we may find value in face to face interactions with people with whom we will share three weekly hours for just 16 weeks, and never again (save for, perhaps, a Tide football game). Such brief exchanges are not uncommon today.

What is the long-term impact of such anonymity? And how does it encounter other student interaction with other students, but also faculty and staff? Yes, our initial interest in Gorgas House, a historic building on campus which once held the university’s cafeteria, was linked to my wish to open a door to the lives of early UA students, all of whom were male. These young men had food fights in their cafeteria, chased professors and were fond of dueling. Their bad behavior figured into the university becoming a military college. 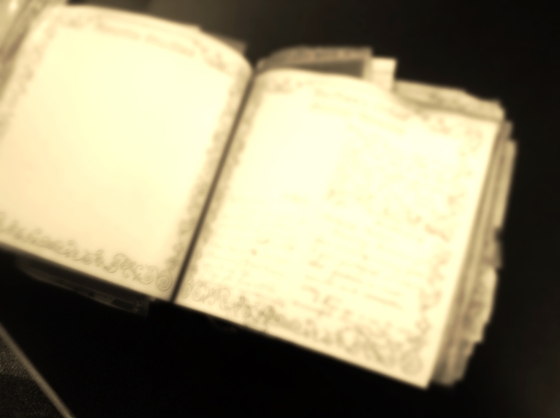 One aside: the albums, which are generally 9″ x 6″, were all published by Reilly and Bratton (later Reilly Lee, a company that published L. Frank Baum’s The Wizard of Oz series). Also, I will embark on a similar journey as the students. In late March, I will present a paper at a conference in Florida. During my visit, I plan to make time to see my mother and sister, who live in Florida. We have decided to spend one night scrapbooking. I have already started taking out old photos and plan to use a scrapbook I got from my husband for my recent birthday.

2 thoughts on “antebellum “coming of age” moments via old scrapbooks”